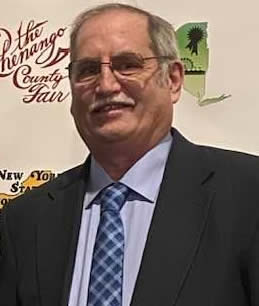 Ed Rossley, our 2022 Workhorse of the Year, has worked his way through the chairs and is the current president of NYSAAF. He was part of the executive board that had the difficult task of navigating the era of COVID, as well as planning a convention post-pandemic. As vice president, he worked diligently to plan conventions that were both meaningful and fun for both NYSAAF and NYSSA. Ed, along with other members of the NYSAAF executive board, shared a vision for a strong collaboration and relationship with NYSSA and its members.

In the summer of 2022, Ed set a goal to visit every county fair across New York State – sometimes visiting more than 5 in the same day! Ed and his wife, Gretchen, traveled across the state to visit fellow fair people and showpeople. Along the way, he enjoyed delicious fair foods, snapped lots of pictures, and shared many smiles. It was not only incredible to see the president of NYSAAF visit every single county fair, but he was also preparing and organizing his own fair back home.

We would like to congratulate Ed Rossley for all of the love and miles that he dedicated to the great fairs of New York State!