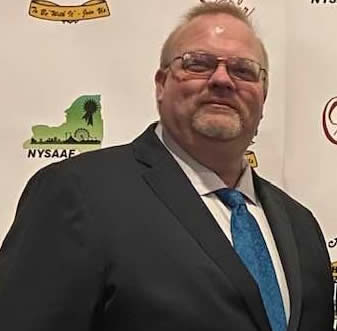 Jason Lawrence has been involved in agricultural fairs - at the local, district and state level - for nearly 20 years. Most recently, Jason served two terms as the NYSAAF President. Upon becoming President, he faced challenges from the start, including the adjusted schedule of the NY State Fair, which created a statewide impact. Jason facilitated the necessary collaboration between NYSAAF and NYSSA and working together became more important than ever.

Navigating COVID-19 created a variety of new challenges for all of us. The future was uncertain and unstable. Jason continued his role as President, leading through uncharted territory. Zoom meetings became the norm and the virtual county fair was created as a way to keep the excitement and energy of agricultural fairs alive - a bright spot for many. A team of dedicated fair and showpeople put together a variety of activities showcased on Facebook, culminating with an outstanding fireworks display, creating a sense of community and a bit of normalcy.

The reopening of “traditional” fairs created a whole new set of challenges for everyone – handsanitizer, wash stations, masks, changing requirements by the department of health - many unknowns to consider. Jason provided updates and led conversations to address the myriad of scenarios that fair and show people were facing to be back “in person.” Thankfully, most fairs were able to open and were met with much excitement from the community.

If you get a chance to spend some time with Jason, the excitement and love for fairs is evident. He will undoubtedly share a story that includes great food that from a certain vendor, games that he played with the kids, musicians and talent that is unmatched, and he will always work in a Joie Chitwood story or two!

Creating a strong bond with the NYSSA was and continues to be important for him. Together, we are stronger.